Archive for the ‘Economy’ Category

Life’s Challenges — Laugh at Them

If you like the image but want a different saying, we can do that. Just follow the link on the image to the Steve Henderson Fine Art site.

When things go wrong, generally the first thing we do is get mad. Now getting mad isn’t such a bad thing — the energy derived from it impels us to make changes and move forward, but if we stay in the angry state, we lose the very movement that got us going in the first place.

And sometimes, there’s no set person or establishment to get mad at — and we find ourselves being angry all the time.

So, why not laugh? Laugh at Life’s Challenges talks about this more in depth, and I invite you to visit another site of mine, This Woman Writes.

The Laugh at Life’s Challenges inspirational poster is available at Steve Henderson Fine Art — for $10.95 you can start an art collection. Each poster is available with the saying, without the saying, or, if you purchase 5 or more of the same image by contacting us to customize the order, you can add your own saying and pass around your wisdom to four other people. 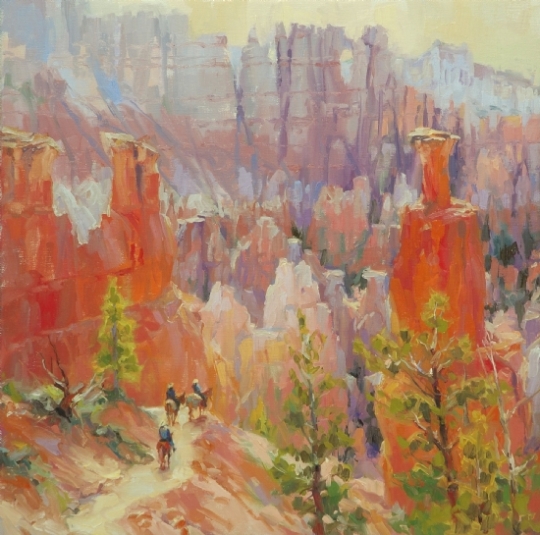 Whether your summer vacation plans include an actual visit to Bryce Canyon, or consist of vacationing at this National Park treasure in your mind while you tan on top of the trampoline, Descent into Bryce will take you there, again and again, from your living room sofa. Summer, and all of its joyous fun, lives on through visual art.

Available as a signed, limited edition print in two sizes, Descent into Bryce comes framed and unframed, and starts at $55. Shipping, as always, is free.

Visit Steve Henderson Fine Art to find the perfect painting for your wall — whether it is an original oil or watercolor, a signed limited edition print, a miniature study, or a note card.

Art is priceless, but it doesn’t have to be priced out of your reach.

Daydreaming, 8×9 Oil on Panel, has been accepted to the 32nd Annual International Marine Art Exhibition at The Maritime Gallery at Mystic Seaport, Mystic, CT. The show begins September 24, 2011 and runs through November 13, 2011.

Soho Myriad, an art consulting firm that focuses on high-end hotels nationally and internationally, has signed Steve Henderson on to their exclusive cadre of artists. With offices in Atlanta, GA; Los Angeles, CA; and London, United Kingdom, Soho Myriad works on a worldwide project by project basis, selling original works of art for public spaces as well as publishing images for suites, corridors, and guestrooms of various projects.

If you are an establishment looking to incorporate fine artwork onto your walls, contact Soho Myriad and inquire about Steve’s portfolio, which includes landscapes, like Last Light in Zion (above), seascapes, still life and figurative work. You may also visit Steve Henderson Fine Art to view a selection of his work. 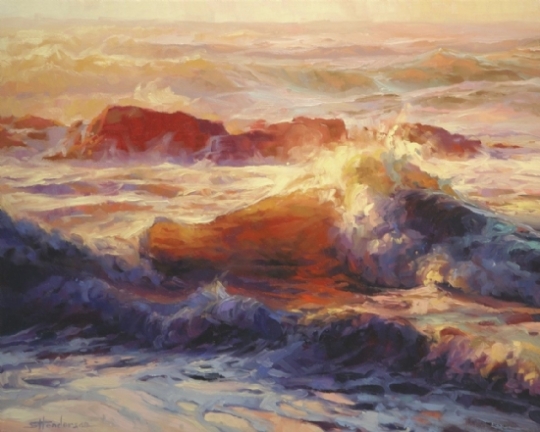 Opalescent Sea, an up close and very personal view of the Pacific Ocean waves, has been accepted into the 15th Annual  American Society of Marine Artists National Traveling Art Exhibit.

From over 450 works, the jury of twenty ASMA Fellows picked 86 paintings and seven three-dimensional pieces, representing the very best work of the ASMA membership. 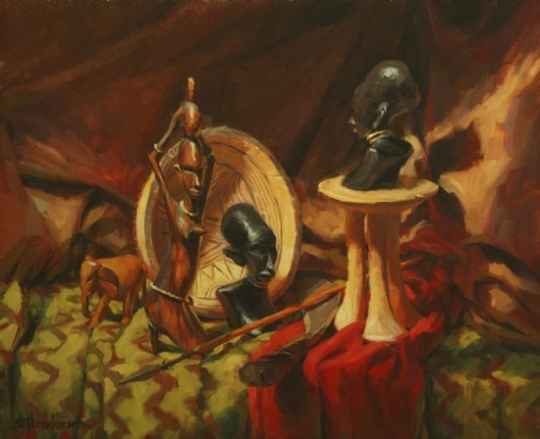 Out of Africa — a collection of mementos and curios from Dr. Donald  Lehmann, a microbiologist and noted researcher of tropical diseases.

Snow Patrol and Their One Million Unanswered E-mails (Including Mine) 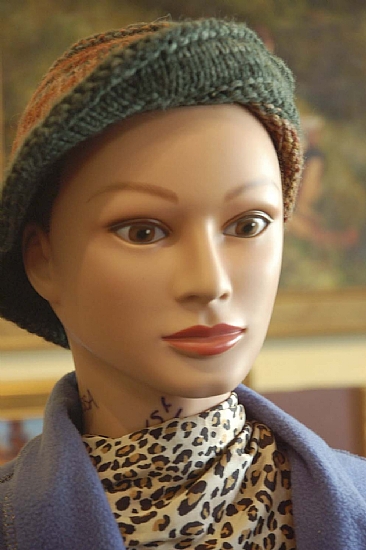 Our youngest progeny, seeking to drag us kicking and screaming into the 21st century, set up a slide show of the Norwegian Artist’s works set to the Snow Patrol song, Chasing Cars — a song which College Girl and I listened to on repeat for 3 hours as we were driving through Central Washington — although, not knowing how to set the “repeat” button on the car CD player, we took turns hitting the “play again” button. (There is a reason why the Norwegian Artist and the Son and Heir do not like to take long trips with me or the female progeny.)

Back to the slide show. Looks incredible! The song and the paintings flow beautifully into one another.

However, before you head to YouTube to look for it, be aware that it is not there, because when we started to post it, we were alerted by all sets of dire warnings telling us that we were using a copyrighted song without permission, and that the YouTube people would scour the earth to run down this slide show and eliminate the music from it. We could, however, choose from their selection of approved songs, which included, interestingly, two elevator-music versions of Chasing Cars by people who were not Snow Patrol. (Apparently the people who used to stand in elevators and push the buttons for you are so under worked that they moonlight by converting existing songs with words into bland arrangements of musical notes uniquely suited to putting people to sleep — an organic pharmaceutical, so to speak).

So I wrote the Snow Patrol people, asking for permission to use the song, not realizing that these people’s e-mail box is inundated with even more messages than mine, the latter which is packed daily with minute -by-minute updates from a company with the same name as a giant, slow-moving South American river.

How is it, I ask Tired-of-Being-Youngest-Techno-Babe, that other people post slide shows of their beach weddings and children’s second birthday parties and third cousin’s piano recital (playing Chasing Cars) — set to copyrighted music and their shows move on, smoothly and without problem?

“They just do it,” she shrugs.

Me, I feel like Mannequin Mary in the featured photo, frozen in shock, unable to speak, wondering when Snow Patrol is going to answer my e-mail.

Until then, I suggest that you make up a slide show of your own: Go to Steve Henderson Fine Art Landscapes,  Seascapes, Figurative, or Sold (hit the link of your choice; I’ve set up the first page for you); next, start playing Snow Patrol’s Chasing Cars; while the song is playing, hit the right hand arrow to the right of the work; and voila! you have a slide show of Steve Henderson’s fine art original oil paintings!